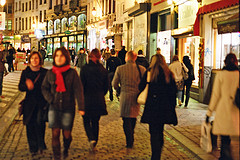 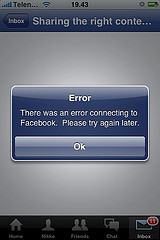 Because I can count on one hand the number of my close friends who don’t use a social network, and because Facebook has been a dominant online presence for me for some time, Facebook’s announcement last week caught my eye.  I’ll say up front that I’ve been disillusioned with Facebook for some time, and each of the “improvements” that they make to their user interface and website design leave me grumbling and trying to figure why they, like Microsoft, never actually improve anything, but merely make it more difficult to get to.  Now, I’ve read several opinions about how positive this latest overhaul of Facebook will be, and I’ve heard at least one colleague say that this is the best thing Facebook has ever done. However, as I’ve come to use Facebook less and less (at least as far as my personal page is concerned, if not so much this blog’s Facebook page), I’m struck by the rationale behind this change.

Karen is much less of a sharer than me. I readily post details on Facebook about myself and us, including “checking in” to particular spots that I frequent.  However, I post less intensely personal information on Twitter. Part of the reason I have chosen to use Facebook for this purpose instead of Twitter is because Facebook is a “walled garden;” that is, I have (at least until recently) had careful control over who sees this information. I know that my Twitter feed is open to the public, so I filter the information I post there more carefully. When we were in the hospital last week delivering our baby, I kept family and friends updated via status updates on Facebook in detail, but gave much less detail on Twitter. This is because I knew exactly who was going to see my Facebook updates, but not my Twitter updates. Part of Facebook’s overhaul, as I understand it, is to make sharing more automatic. I hear this to mean that my online activities will be fed into Facebook without my thought or ongoing permission. There is such a thing as too much sharing. I post a lot of the books I read,  but not all of them. I share several links I find interesting, but not all of them, and certainly not all of them on Facebook. I want to give more awareness to what I share, not less. This seems to place me at odds with Facebook’s new strategy.

And, honestly, that form of sharing wasn’t the reason I set up a Facebook profile to begin with. Real-time sharing has always been Twitter’s strength, whereas a Facebook page, for me, is a static place to be able to communicate with friends and family even though their phone numbers of email addresses may have changed. I began to dislike Facebook when it began trying to copy Twitter…that is, when it tried to become a stream of real-time updates like Twitter was. I’ve always been a fan of a business being good at its specialty, and not trying to spread into multiple specialties. At some point, things become diluted until nothing is done well.

What grabs me more than disagreeing over the approach of Facebook, however, is the culture of sharing that has launched the changes. The mentality of our culture, and apparently of Mark Zuckerburg, seems to be that true happiness is only found when we’re completely transparent with everyone around us. As an introvert, I find the idea of everyone around me knowing everything about me to be remarkably similar to hell. Perhaps this is another way in which our culture rewards extroverts and prizes them as the examples of “good people,” but there is such a thing as too much sharing. I resonate with a comment that I read on Google+ recently to the effect of transparency being a good thing with politicians because we pay them, but opaqueness for the rest of us being an equally good thing. I think we forget that anything we post online has no expectation of privacy, and that its online forever, somewhere. Still, I have no obligation to be transparent to my neighbors. I only share what I choose to share, and I don’t like the idea of someone sharing things that I don’t agree to being shared.

My fellow-blogger, Ami, recently said that she intentionally never posts pictures of her children online, for any reason, and becomes upset when others post photos of them and tag her in them. As my daughter joined the world last week, I thought about this. I shared photos of her with my friends on closed networks, but not here, which I leave open to anyone who wants to read, and not on my Twitter feed, where I do the same. And, I was specific and careful about which photos I shared. When she’s old enough to make the decision of how much of her life she chooses to share, then she can, but I’m not going to rush that for her. Perhaps, after all, she’ll be an introvert like her dad.

My answer to the whole thing? Move away from social networks that don’t protect and respect my privacy. I’m over Facebook. I’ve found myself using Twitter much more fruitfully for some time, but I have to recognize that I use the two networks for different things. Earlier misgivings aside, I’m particularly taken with Google+, where I can meld my pubic and private sharing with a much greater degree of control than Facebook permits. I’m also considering creating a Tumblr page, and would gladly remove myself from the Facebook world altogether and make Google+ (and potentially Tumblr) my primary network(s).

Here’s the issue with that strategy, however, and its one that concerns me: Facebook, as a sort of patriarch of social networks, has achieved a “too big to fail” status. This manifests to me most readily in the fact that I find myself forced to keep using Facebook because that is where most of my friends remain. A social network, after all, is only as effective as how many of your friends, family, and colleagues with whom you can be social. So, for now, I continue to touch base with my Facebook page, but with much less frequency than I have in the past. I’m waiting patiently until more (or even most?) of my friends begin to use Google+, in the hopes of leaving Facebook behind forever.

What are your social network preferences? Are you tired of Facebook’s privacy abuses? Tell me what you think.