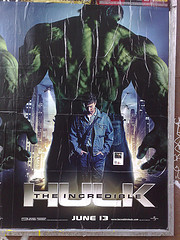 Continuing my short posts on the previous Avengers films as I build up to this weekend’s opening, tonight’s topic is the Incredible Hulk.

I remember being very glad that a new big-screen attempt was being made for the Green Goliath when this was announced several years ago, as the previous Hulk film had been…well, let’s just say that we all prefer to forget it. This newest incarnation is a good film, though, if a bit underwhelming compared to the rest of the Avengers films.

Chronologically, the events in the Incredible Hulk occur simultaneously with the events in Iron Man 2 (how do we know this, you ask? Check out a cool rundown of hidden nuggets of visual niceties in all the movies here). Bruce Banner has been on the run for some time, though, as the film opens stylistically recalling (though Banner’s eyes) the accident that transformed Banner into the Hulk. We learn later that these experiments were veiled attempts to further weaponize the World War II “super-soldier” serum that created Captain America, and that Banner is ultimately an unintended consequence of these experiments.

Banner, and the so-called monster into which he transforms, are fascinating because they are reluctant heroes. Banner is on the run, desperate to cure himself of the transformations that afflict him, because he recognizes that the power of the Hulk is too dangerous to be weaponized (this smacks a bit of Tony Stark’s fear of his Iron Man technology falling into the wrong hands, as I’ll talk about in my next post). Banner just wants to return to his life before it went wrong, and to live it with his true love, Betty Ross. While in hiding, he reluctantly stands up for what he knows to be right when he defends a lady’s honor against the predatory men who corner her. Even when confronted by the wrong-doers later, and while pursued by those who would capture him and attempt to extract the Hulk from him to harness his power for destructive purposes, Banner still pleads for a solution that prevents him from becoming angry enough to trigger his transformation into the Hulk.

Initially, the Hulk acts on instinct, retaliating against those who hurt him. Of course, he continually astounds his military pursuers with his sheer power, because the angrier the Hulk becomes, the more powerful he becomes. However, we see the character that was originally created by Stan Lee as a hybrid between the Frankenstein monster and Mr. Hyde recognize the woman he loves, and act to defend her, even against the consequences of her revenge-driven and power-hungry father. In the end, the Hulk defends her father, as well.

When one of Banner’s rogue pursuers transforms himself into the Abomination and begins wreaking havoc among innocents, Banner has potentially been cured of the Hulk transformations. At the risk of dying himself, he leaps from the aircraft at the climax of the film in hopes of triggering the transformation. He hates and fears the Hulk, but recognizes that only the Hulk can defeat the threat that is currently taking the lives of innocents. He suspects that he cannot control the Hulk, but agrees to “aim it,” in hopes that, whatever happens to himself, the monster within him will accomplish the good that no one else can. In the end, after the Hulk’s victory, he flees his pursuers once again, and ends up alone…but gaining the ability to control the Hulk.

Bruce Banner shows the nature of a hero because, while he doesn’t choose the life of the hero, he agrees to accept it because of the unique power that he now holds. He agrees to use this power to save others, others who are helpless to save themselves, despite the risk that he may not survive the attempt himself, or may lose himself inside the monster. The fact that Banner is such a reluctant hero makes him one of the most fascinating. 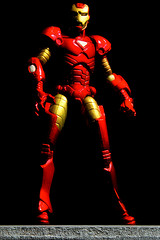 In preparation for the opening of the Avengers film in the upcoming weekend, and in true geek fashion, I’ve been embarking on a week-long series of watching the rest of the Avengers cinematic canon in order, from Iron Man through Captain America. So far, I’m two films in since Thursday. My ingenious plan to take over the blogosphere that is resulting from this is to do a short post for each of the previous films, and how they relate to my thoughts on the nature of a hero. Then I’ll post a review of the Avengers film when I’ve seen it (disclaimer: I’ve been known to skip opening weekend in order to enjoy a film with the absence of opening night insanity. Time will tell if I do this for the Avengers…my excitement may just win out, in this case).

I began my retrospective, then, with Iron Man. Tony Stark is the first Avenger we see in the film histories, and he is at his narcissistic best when we meet him. Thriving on a business of arms production that he inherited from his father, reaping the enormous financial benefits of a corporation that makes weaponry for war zones and sleeping at night in a sort of willful ignorance about the sticky ramifications of where his weapons may be ending up for less than honorable purposes. Not until Stark is captured by terrorists who intend to force him to build his weapons for them does he see his technology in the use of the other side, deployed for the slaughter of innocents and perpetuation of nefarious regimes. We know, of course, that it is in this captivity that he builds the prototype armor that will evolve into the Iron Man identity, and he does so with the assistance of a fellow captor. During his escape, his fellow captor (who claims to have met Stark years ago at a formal function, but who Stark cannot, of course, remember), sacrifices himself in order to assure Stark’s success. With his dying breaths, he tells an already guilt-ridden Stark that he has been given his life back, and that he should not waste it.

This is beginning of the end for Tony Stark’s intentional naiveté, and he begins to ask questions of what his company is doing. Suddenly, he is able to see that his technology can be found in various war zones being used by evildoers, and he vows that his company will stop making weapons. When the company continues its weapons business in spite of him, he assumes the Iron Man identity to use his own technology to defeat what he has already built, taking on a singular focus of ridding the world of an evil that he created (he tells Pepper Potts later in the movie that this is “all there is”).

Tony becomes a hero when he chooses to live out the forgiveness that he has received, to act out redemption on whatever parts of the world that he can impact. Of course, he does not experience a complete change: we still see an arrogant and self-absorbed Stark in the second movie. Tony Stark, however, assumes the mantle of a hero because he has been forgiven much, and chooses to not waste the redemption that he has been offered.

Going in order, my next post will on the Incredible Hulk.