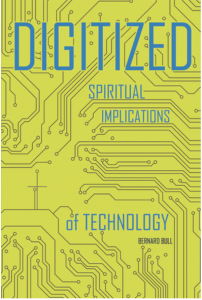 This book intrigued me because I’m always fascinated by interdisciplinary explorations, especially when the thoughts surround theological implications of how we live our daily lives. As I’ve always been a bit of geek, and now make my living in technology, thinking theologically about that technology and how it impacts not only what I do, but how I live, is an exercise that I do regularly in any case. Hearing someone else’s thoughts on this is always welcome to me.

So, Bernard Bull’s Digitized: Spiritual Implications of Technology popped out to me as a must-read. I’ve never heard of Bull prior to this book, or read any of his other work, though he is published elsewhere. What I expected was a theological treatment of technology and daily life. What I got, to my disappointment, was a more religious recommendation of how to utilize technology in practice.

Bull’s examinations are of a very surface level. Spread widely through his book are definitions of basic concepts, such as social media and blogs. While establishing definitions early is important in any scholarly work, Bull dwells on these definitions at length, targeting readers who are not technically savvy at the expense of those who are. As a result, he manages to alienate readers such as myself (who are drawn to what the book appears to be about) in his earliest chapters. His recommendations at orthopraxy are low-level, extremely basic, and backed by views that smack of the very legalism that Bull insists he is trying to avoid.

That said, the book is not entirely without value. Bull spends time discussing the spiritual perils of a cultural obsession with efficiency, emphasizing that a Christian theological worldview insists that people are created in God’s image, and thus are more than the numbers to which the business world attempts to reduce us. He also includes thought-provoking discussion on the concept of identity and how this is effected by our digital presentations of ourselves, the implications of which are a relative concept of our true selves and how that relatively is, by definition, untrue.

Continuing on this concept of relativity, Bull speaks a timely truth in regards to how digital expression impacts our perceptual filters of the world in which we live:

“We are inclined to believe that which is presented in the most persuasive manner rather than that which is true. We celebrate social and political commentary that appears in 140 characters…We grow disinterested in lengthier explanations. We turn to ad hominem attacks on those with whom we disagree instead of respectfully debating the issues. We value news as much for its entertainment value as for its accuracy and information. If we are not careful, such practices breed skepticism about truth.”

While Bull attempts to give us practical applications at the conclusion of his book (most of which I forced myself through as they appeared to be targeting those of an unrealistic level of technological illiteracy), his best practical take-away, perhaps ironically, comes from someone else. He borrows from Neil Postman and his contribution to the field of media ecology. Bull encourages the reader to answer the following questions when adopting any new technology (taken from pp. 130ff):

Personally, the answers with which I found myself after asking the final of these four questions were…troubling….in regard to some pieces of technology that have a place in my life. Despite the large percentage of the book that was disappointing to me, there was much value in this application, though I question whether it is more Postman’s application than Bull’s.

Altogether, this book is worth reading for the 10% that is thought-provoking, assuming the reader is willing to either skip the rest or force themselves through it. Digitized is far from what I expected, but not completely without value.

When I heard about Alliances: A Trick of Light, I was inordinately excited. I had no idea that Stan Lee had collaborated on this project before he left us (far too soon)…in fact, this could be the last project upon which he worked. Listening to his forward was haunting, in a way, taking me back to all of those animated programs upon which I heard his prefaces and conclusions as I grew up. Stan Lee gave us such amazing stories…I couldn’t wait to dive into one last adventure.

Alliances is exclusively an audiobook, but don’t let that deter you if it’s not normally the way that you read. I say that partially because this project was written specifically for an audio performance, complete with musical scores and sound effects throughout, augmenting the actor’s already superb performance.

True to our expectations of what a final project from Stan Lee would look like, this is a comic book story arc in its truest form, yet with a substance in which a prose narrative is more fitting. We dig deeply into our protagonists’ lives, growing to know the characters at a remarkably intimate level given the pacing of the story. I give this caveat about the pacing because the authors spare no time in getting to the action. Our characters include a cyberkinetic, an alien predator, and…some surprises that I won’t give away.

I was taken a bit by surprise with the fact that this novel flirts with being YA, which honestly would have been a huge detractor for me (no offense to the genre, it just isn’t one that I particularly enjoy), but it avoids landing in that category. This does have components of a coming-of-age story, but you shouldn’t expect that sort of plot because it departs from it quickly. The convention is more of a device, a means to an end to get us to where the story needs to go.

There are twists here that drive the intensity of the narrative, and that I definitely didn’t see coming. When we discover the nature of one character’s identity, I had to pause the book and spend the better part of an hour digesting what had just happened. This is the clever, compelling sort of adventure that comic readers love.

I have to admit, though, that I’m left digging for what the authors are trying to say. Lee gives us cryptic hints in his preface, and I get the obvious: loyalty, a desire to belong…honestly the sorts of themes that I would expect to find in a YA novel now that I think about it…but nothing stands out. There are also timely references to our political climate that feel forced at times, but are at other times eloquent in their succinctness. Ultimately, what I think is valuable is that there is a true exploration of heroism here, as the characters explore what it means to act heroically to the world, and to each other, with all of the sacrifices that, while not initially obvious, are always necessary in the end.

Alliances is a great read for fans of Stan Lee’s work, or fans of comic books or superhero fiction in general. Currently, it’s exclusive to Audible, which presents an unfortunate barrier. You can, however, sign up for a free trial and keep the audiobook if you cancel. That’s a worthwhile workaround if you don’t want to subscribe, as this is truly worth the read.