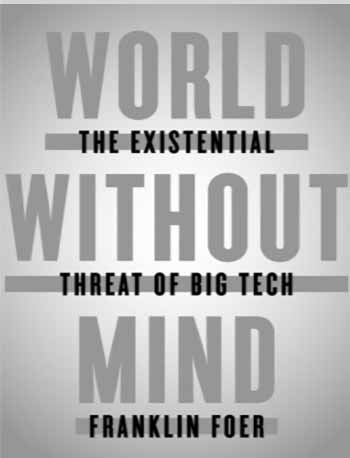 Much as the author does in the beginning of World Without Mind, which is interestingly split between being opinion and being investigative journalism, I’ll admit my own pre-conceptions going in. Namely, I don’t require any convincing that Amazon and Facebook are evil, and, given my recent suspicions, I would require little to nudge my opinion of Google over the same line. So, of course, this book quickly slid to the top of my to-read list given the description.

The author, too, admits his bias at the beginning of the work. He was an editor for the New Republic who was displaced when the magazine was purchased by a Silicon Valley investor who had come from Facebook and, so we are told, sold the magazine’s soul of liberal tradition in the interest of clicks. To Foer’s credit, he admits the lens of frustration through which he writes early. I think that he underestimates the level at which it colors his work.

This book is curious, equal parts history, op-ed, and social theory. He has done his research on the foundations of Google, Facebook and Amazon, and he doesn’t mince words in condemning their questionable practices. My hesitation was in the missing sources in his work, but I read this an audiobook, which doesn’t really lend itself to referencing footnotes or endnotes as a format. So, I honestly don’t know if these are present or not. If not, then the journalistic integrity is obviously called into question.

What becomes at times odd, however, is Foer’s digression into what I can only describe as conspiracy theory. He paints a dystopian undercurrent to our present, theorizing how Facebook and Google conspire to be the sole entities to possess all of the data of our personal lives, using it to manipulate us into thinking and feeling how they want us to think and feel, and to purchase what they want us to purchase. I don’t think that he’s entirely wrong. His condemnation of the algorithm in particular, however, paints more of an image of an eccentric professor ranting against an evil that only he can see more than it does a serious journalist giving us facts in order to inform our choices.

His denunciation of Amazon is more focused on corrupt business practices than the other giants in his crosshairs. Again, I miss sources, but the history he outlines of Bezos’ empire is a damning portrait of a power-hungry business intent upon devouring any competitor in order to become the only source from which we can ever purchase anything.

Foer also spends some time speaking of the fate of the writer and the de-valuation of intellectual property in the Internet age. His feeling is that the dorm-room philosophy of tech giants is to abolish all individual credit to any writer as part of the process of implementing the hive mind. For all of his valuable points as to how writers are continually not paid their worth, and to how print journalism in general is overwhelmed by less intellectual forms of media, this smacks of paranoia and the curmudgeonly punches of one done wrong.

World Without Mind is thought-provoking for all of its shortcomings. While the concluding call to action falls flat, I do find myself examining the trust that I place in Google in particular (my own condemnation of Facebook and Amazon were solidified long ago), and I have found myself beginning to change some of the choices that I have made in how I engage these services.

Anyone who uses social media and e-commerce without questioning would be served at some level by this book. My concern is that Foer is unable to detach from his personal bias sufficiently to present an argument in a compelling enough way to sway the opinion of the majority of readers. I can’t help but feel that there’s a darker truth under the surface of our daily interactions with the Internet that Foer is sensing and the rest of us are downplaying. Hopefully that is my own conspiratorial imagination at work.