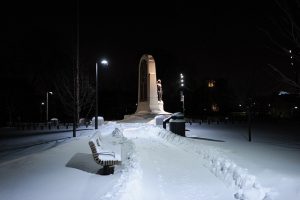 A few weeks ago, before an uncharacteristically warm few weeks in New England, I was driving home on a route that had been my evening commute for some time when Karen and I lived here previously. As it was still winter, there was a good deal of snow still piled on the sides of the road…I’m guessing a couple of feet, or so…when I stopped at a traffic signal on the final stretch of my drive home.

My drive home now is nearly identical to my drive home then, and, as this particular traffic signal takes a bit longer than one would expect to change, I have often found myself observing the surroundings on either side of the intersection. I did then, and I do that now, and those snow banks sparked memories for me.

I felt as though, even after having been gone for two years, that our old lives were hibernating in that snow, suspended somehow as though we had never been away. I had been so homesick for this area for our most recent two years in the South, and, upon our return this summer, we fell so easily back into the rhythms and routines that had marked our lives before we left.

I can remember when Karen and I first explored this town. We drove around, looked at an apartment, had a picnic on the common and discussed if we could live here. It was small to me, but there was something about it. We took the apartment, and stayed. When we knew this summer that we were moving back to New England, there was very little discussion…indeed, almost the assumption…that we would live here again. In our short time here, there was so much about our family that solidified in my mind. Somehow, it felt as though that would all just resume when we returned.

Except that so much has changed in two years. Our daughter isn’t as young as she once was, and Sunday afternoons of Daddy-daughter time watching Kipper and Thomas the Train aren’t so much her speed at this age. She’s moved on. I’m not working the theatre gig I worked on weekends when we were here previously. We have two children now, not just one. Our faith community no longer holds a service on Saturday nights. And those are just the differences that I immediately noticed.

Life isn’t static. It doesn’t sit still. We can’t just resume where we left off, as much as I would sometimes like to do so. Because it’s not as though Karen and I didn’t experience some really difficult times when we lived here before. We did. Like most of us, though, I tend to hold on tightly to the positive memories and lightly to the bad, a coping skill which lets nostalgia get the better of me.

So, I guess I’m only doing what all of us do, walking in that dissonance between knowing we can never return to the past while still holding onto it in the knowledge that it shapes who we are in our present. Those years weren’t as glowing as my memories would have me to believe, but each of their combined experiences, good and bad, have come together to make me who I am now at some level. All else being equal, I would much rather walk in this dissonance than forget that past altogether.

I walked downstairs to the kitchen for a lunch break last week. Our youngest was down for a nap, Karen was working quietly on a project, and our oldest daughter, as though in a flashback to weekends of two years ago, was laughing joyously at an episode of Kipper.

Perhaps we haven’t diverged quite as much as I thought.