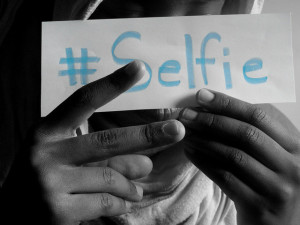 Earlier this week, I updated the operating system on my phone. Karen always says that I should block off two hours for such an event, because I like playing with shiny new things. She’s not altogether wrong (although I think that two hours might be stretching it a bit). In browsing through some of the changes that this particular update brought about, I landed upon something unsettling.

There’s a new album in my photos. It’s called “Selfies.”

Because the selfie isn’t something that I do, nor will I ever, it’s interesting to see what this “intelligent” album is including…candid photos of me in a funny hat, for example, that Karen took with my phone one day while we were shopping for something. I mean, if it includes only my own face, then it must meet the definition of a selfie, at least by the software’s calculations, right?

Except I’ve seen this thing in the wild, and this isn’t it.

A few weeks ago, we were visiting family in a different state and were out to dinner. It was Sunday afternoon, and the restaurant was a bit busy. Another family sat in the booth just to the left of us, grandparents and a teenage grand-daughter if appearances were accurate. During a break in our conversation, my attention drifted over to them. Their conversation was still moving along, and I noticed the grand-daughter slip her phone from her purse, smile into it, snap a photo of her face (it was a phone the size of a tablet, so it was difficult to miss what had happened), and begin typing whatever message that was to accompany its posting to whichever medium she was choosing.

I just witnessed a selfie in progress. Disturbing.

What was disturbing about this to me was the alienation, however momentary, of the people with whom she was sharing this moment, in order to, it would seem, take the opportunity to propagate her likeness to people with whom she was not in “real” contact. I struggle with having to keep my back to television screens when I’m in a restaurant so that I can focus on those with whom I’m eating. I don’t need to distract myself further by even considering what my Twitter followers might think of where I am, or whether or not I’m smiling while I eat my food, or whatever. I’m there with people, interacting interpersonally. Isn’t that a larger priority?

Fast forward a couple of weeks, when Karen and I were eating with our daughter during a Saturday afternoon shopping excursion, and I saw a group of teenage girls outside the restaurant window pausing at a set of steps in the mall to snap a quick selfie, taking time to compose the photo just right. That day was the first time I actually saw the “selfie stick” phenomenon in use.

I was equally disturbed.

Now, I know the literature and opinions that claim that the selfie is simply a controlled form of expression of one’s image. There’s actually some research that claims that this is a healthy expression, a way to take back control of one’s image within one’s social circles in a way that one can choose, that one can control, that is not objectifying and is thus empowering. I’m afraid I must disagree. The selfie is the height of narcissism, and it’s distasteful to me not even because I don’t (and don’t think anyone should, in the interest of good health) love myself nearly that much, but because I believe that we should love those around us more.

I see the selfie, however, not as a surprising cultural event, but rather as the natural result of a market-driven society, a society reduces everything and everyone to being a “brand.” Acceptable, perhaps, when marketing a product. Dehumanizing, however, when applied to our interpersonal…and intrapersonal…existences. The selfie is something flat, something one-dimensional, something lacking substance, because it is focusing on image-management, presenting a crafted representation of how the individual wishes they were. I suspect that this gives the person the escapist ability to avoid considering their true condition, to dance around the existential questions that we all grow as human beings for asking.

My goal is not to sound curmudgeonly. I don’t wish everyone to go through life examining their every flaw with no joy or escapist outlets whatsoever. I’m human, and I’m as escapist as anyone else. I’m concerned, though, at the painfully inward, selfish focus that our culture not only permits, but rewards. The less we know…or care about…our neighbor, the further we sink as a people. The less concern with others that we permit ourselves, the less human we become.

I complained on the night that I wrote this that I didn’t get to buy something that I had wanted because we needed to spend the money on our daughter’s educational supplies. I groaned that I feel I don’t get what I want because others need what they need worse.

The more inwardly focused I become, the more miserable I become.

I don’t really want to be miserable while masking it under the guise of a well-planned photo of myself in various surroundings.

I don’t want to be miserable at all.

I certainly don’t want to fake it, either.