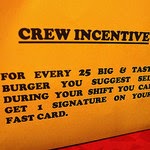 There’s a certain restaurant chain that’s quite prominent in the South. It exists sparsely in New England, but when we moved to North Carolina last summer, we were reminded of just how popular this certain restaurant chain is here. This particular restaurant chain has a policy. When you thank the person waiting on you (which, having been on the other side of that counter for a good bit of my college career, I always do), they respond by saying, “My pleasure.”

It’s become a bit of a trend in the past couple of years, as well. Two years ago, Karen and I purchased a car. As I sat in the salesman’s office in the dealership, I noticed, taped to his phone (and presumably every other phone in the building, as well, as it was the response that I received with every call), was the reminder to say, “My pleasure.”

When I schedule an appointment with my chiropractor, the response on the phone is, “My pleasure.”

For crying out loud…

Don’t get me wrong, this is perfectly polite, and all. And, certainly, if there’s anything for which the South is known, it’s politeness. It’s just that I would rather hear the actual thoughts of the person assisting me…I’d rather hear the way that they would say thanks, rather than a scripted response. And if they don’t want to thank me, that’s fine too. I’m a New Englander. It doesn’t bother me.

And, the problem goes further.

You know the feeling, I’m sure. You’re on the phone with a support person for some large company or service, and you’ve asked the question that you know isn’t going to be answered the way that you want. You’re greeted with, “Unfortunately…”, and you tune out, because it just sounds too scripted. Or, you’re reading a job post, and it’s sprinkled periodically with phrases like, “Here at (insert company name), we strive to….”, as though you’ve forgotten about which company you were reading.

When I worked at a fast food place to earn the rent during my undergraduate days, part of the motivation for me to continue my education and do better for myself was the complete prohibition of thinking on your own. There is to be none of your own polite responses or conversation in those environments, there can be only the scripted response that someone in the corporate headquarters has decided is appropriate. The problem goes further up, though. Technical support staff answering a phone must reply to your questions with a script that sounds all too robotic (“I’ll be happy to help you with…”, instead of something simple, like maybe, “Sure, let’s see what we can do”). Copywriters can’t just fluidly be creative with their copy, they must force the marketers’ scripts into the project, no matter how foreign it may sound. The larger the company, the worse the epidemic. What surprises me is the fact that the corporate decision makers still think that this is a good idea, continuing to have these scripts in place. Do they not realize that it serves only to frustrate?

The repercussions of this issue are huge. We’re removing more and more independent, critical thinking. We’re squashing creativity at record volumes. We’re reducing the quality of human interactions, objectifying both the customer and the employee with whom they are conversing. All because of a lack of trust.

If you interview and hire your staff for a certain role, then trust them to do that role. Trust them to think and to make decisions on their own. Trust them to exercise (*gasp*) some creativity and to be themselves in their interactions with customers. If you don’t trust them in this way, then you either shouldn’t have hired them, or you don’t deserve to have them as employees to begin with. My personal opinion tends toward the latter. 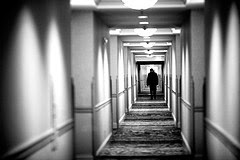 A long time ago, in a galaxy far, far away, I made my living in the behavioral sciences. My workday revolved around seeing people face-to-face. While it was quite exhausting for an introvert to spend most of a workweek conversing with others, I found that I knew the team with which I worked every day. We knew what was happening in each others’ lives, we celebrated career milestones with each other, we had each others’ phone numbers. In some cases, I worked in high-stress situations keeping very odd hours, and I knew what it was to see my colleagues more than I saw most of my other friends. We were, after all, the only ones who could really appreciate what the other was experiencing.

Now that I make my living in the digital realm, I mostly work for myself. I do work with clients from multiple states, most of whom I haven’t seen in person in over a year. In one case, I did a project for a client that I had never met in person. I’m currently doing work with a team that is spread out all over the world, from both coasts of the U.S. to Europe. As everyone in the world of digital content has the freedom to work from wherever they choose, I regularly have “meetings” with people that I have never met face-to-face. I speak with them every week, and know their personalities at some level, but I cannot say that I really know any of my colleagues on this current project.

That’s not to say that I never keep office hours in this line of work. I actually do on many projects, and, on the occasions that I have, I feel that I’ve gotten to be very well acquainted with my co-workers. On each of those occasions, I’ve kept in contact with those co-workers and carried at least some of those professional relationships forward.

This isn’t so much an issue of effectiveness. I’m an introvert, so I’m perfectly content to be alone with my work for long periods of time. I’ve found, though, that I feel more satisfied with the projects that I’ve completed alongside people with whom I’m connected, colleagues that I’ve seen in person and whose interests and personalities I’ve gotten to know.

It’s interesting how the human factor to doing our work is only effective up to a certain level of abstraction. Beyond that, while not, at least in my experience, a point of diminished returns, there’s certainly a point at which the work becomes more robotic, less…meaningful…in nature.

And we all want to do work with meaning, to not be subjected to drudgery.

Ultimately, we’re doing our work for people, for each other. I think that our work is done the best when keeping that in mind.