I mowed the lawn this weekend.

Wow, Dave. That’s…um…amazing. Thanks for the Earth-shattering news.

You see, the thing is, I haven’t done this since before I left my parents’ place to head off for college. Since I launched into the life of a student, professional, and otherwise participator in the adult world, I’ve been either a dorm or an apartment dweller. No lawns to mow, no real maintenance at all, as a matter of fact. Which is actually just as well, because, while I know my way around power tools and have helped build more than a few sets for more than a few shows in my life, I’m actually really not all that handy around the house. Building a facsimile of the real world to stand on a stage, while allowing your skills to develop with woodworking, is actually quite different than building or re-constructing something for the inside of your home.

My dad tried his best when I was young. I hauled wood for our wood burning stove, I even tried to split it on occasion. When I was very young, I went around the house with a set of plastic toy tools to accompany him on whatever small thing around the house needed to be repaired. I would screw and hammer pretend items as dad did the real work. By the time I was in college, I could assemble furniture. That, however, would remain the extent of the handy-man skills that I needed until last week.

The thing that I had always been good at around my childhood home, though…the weekly chore that my dad always felt comfortable giving to me, was mowing the lawn. I studiously observed his teaching me about the techniques with both a riding lawn mower and a push lawn mower than he used to take care of our lawn, which came in at just short of a full acre. Unlike most of the other things that I observed, though, I grasped the practical applications of this. As horrible as I am with mathematics, I grasped the geometry of establishing the angles of mowing, the framing of the area of the lawn that you’re working on and the careful progression inward, making the square always smaller until it does not remain, and you can move on to the next area. Starting and maintaining the mower…there’s a trick to all of that. Handling grass that has grown a bit too tall without stalling your mower…there’s a trick to that, as well. I knew those tricks. I actually took pride in the fact that I had learned this from my dad, that I could contribute to the household in that way.

I suppose it’s like riding a bike. When Karen and I moved into this house upon arriving in North Carolina, we had to purchase a lawn mower. I called my father to get his advice on which one to purchase. We unpacked it, set it up. I was looking forward to taking care of our lawn. A great deal of the rest of the home improvement that needs done to our house I’ve been irritated with, but this…this I hadn’t done in so long, and I was almost thrilled with the anticipation of caring for a lawn again. Starting the mower was a spiritual experience in its own right. I remembered all that my father taught me those years ago. I handled it well. I contributed in the best I way knew how.

The beautiful thing is…I get to do it again next week. 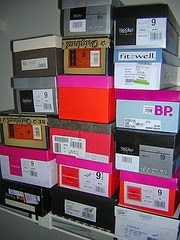 In fact, moving sucked even worse this time than it has in a very long time. You see, despite how definite I was that we wouldn’t be moving for some time…

The issue this time is that we have a house, actually. Not one that we had ever really intended to live in, but one that Karen had owned before we even met. We had kept it as a rental property, but, as it was comfortably situated in North Carolina and we were comfortably situated outside of Boston, we decided to sell it. Except, work needed to be done. After all of the factors were added together, moving back into the house made sense. So, in the span of a few weeks, we planned and executed our second major state-to-state move in three years. That’s a total of four moves in three years, all told, if you’re keeping score.

We were sort of on our own this time, at least for the front end of the move. Where we had been blessed with an abundance of friends that helped us before, this time it was just us. We hired movers to pack the truck that we had rented, and launched into a week-long trek from New England to the Dirty South.

And, thus began the comedy of errors. Well, except…not so comedic.

The morning of the move was tightly scheduled. I was picking up the truck at 9:00, appliances that would be needed at the “new” house were being delivered at 9:45 to be loaded onto the truck, and the movers were arriving to take over packing at 10:00. We were to be on the road by 2:00, on our way to the first stopping point.

Except the truck that was reserved for 9:00 wasn’t returned by the previous renter, and this particular rental company apparently doesn’t keep contingency plans, so I didn’t end up with a truck until nearly noon. Livid didn’t quite describe me. After doing an interesting dance of coordination with all of the parties involved, I eventually received a moving truck. A much larger one than I had reserved. They were giving it to me at no additional charge, though, so I thought it would be good. We could make use of the extra space.

Then I drove it. It was a big truck.

A very large, very long, very tall, diesel truck. A truck about which I will continue to have nightmares for years.

Then, the movers managed to pack the bag containing Karen’s wallet and keys inside the truck…somewhere that we couldn’t locate. So, we had a choice: trust that we would find them during un-packing, or un-pack and re-pack the truck again  ourselves. We chose the first option.

Then, on our second day of travel and after a respite with family, we realized a very troubling fact. That wonderful navigation app on your phone, or the GPS on your dashboard? It doesn’t know that you need a commercial route. It doesn’t know that you’re driving a truck that requires 13 feet of overhead clearance. It navigates you the shortest route because that’s what it does. Except that route through New York state involved a parkway with only 8 feet of overhead clearance.

Did I mention that you get cited for driving a truck that large on a parkway in New York state? Especially since the police had to stop traffic and close off a road in order for me to get out of that mess?

Then, I broke my coffee press.

The next day, I had to figure out how to navigate over Maryland and West Virginia mountains on our way to pick things up from other family members without burning out the brakes on that truck.

When we finally arrived in North Carolina (and after we had managed to back that monster into our driveway), and our friends began helping us un-pack, we discovered that the so-called professional movers had, in fact, not secured anything in the truck, and that several items of furniture had been broken during the move.

You may be familiar with the theological concept of providence. We can debate the miraculous manifestations and definitions thereof, but I can tell you that, from a practical perspective, I prayed more in the week I drove that truck than I likely had in the two months preceding. While that’s a problematic indicator in its own right, my point is that each time I was at a distressing juncture, the providential happened. The cop in New York had another call and let me go with a warning. I encountered another police officer who gave me advice in which ways to go to avoid low clearances. Some family members helped re-organize the truck as best we could to avoid further damage before arrival. Oh, and Karen found the bag containing her wallet, safely tucked away as we un-packed the truck.

The stress of this event isn’t over. We now have a home to repair and get ready to sell. I’m still in a new career with a 2-year-old. This is going to be an interesting few years.

I’ve learned to not plan life too carefully, because it has a way of turning out differently than anticipated. We’ve been in North Carolina for less than a week, and I already miss New England terribly. The mental and emotional adjustments required for this phase of life are going to be huge, and they’re going to be exhausting. What I’ve learned from that one-week experience, however, is that placing my faith outside of my own capabilities is what is necessary just to survive life. I received a much-needed reminder of God’s presence during this move. I’m going to require more of it to handle whatever unexpected adventure life throws at us next.