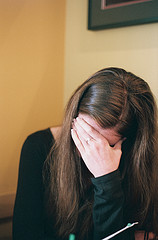 For someone who has a self-proclaimed dislike for routines, it occurs to me that I have a lot of them.

When I get up in the mornings, I have a routine born of the need for survival (have I mentioned that I’m not a morning person?). Wake up, make coffee, drink coffee, etc. If anything happens prior to the “drink coffee” stage, I can’t be held responsible for how it turns out.

When I get home in the evenings, there is an order to how I do things…get the mail, load the dishwasher…you get the idea.

I tend to be very process-oriented creatively, as well…to have a routine, of sorts, depending on the project.  For example, when I’m directing a play, I have that out-of-the-box creative spark in the beginning, and then I follow the same process from read-through to performance, although slightly customized, every time. Karen tells me that I’m a technician in this regard. And, when I’m problem solving, I tend to work through a very orderly checklist…that is, when my friends call me for unofficial tech support, I walk them through “have you tried this? And this?” until the issue is solved. Its very similar when our daughter starts crying: I work down the list of the most likely things that could be wrong until she’s content again.

For some reason I’m normally a little looser with processes when it comes to writing. Maybe its because each project is so different. When I open a new blog post, I start typing stream-of-consciousness, then move things around into the order I want, then edit for grammar, and then I always open it in preview mode and give it one last read before posting. I don’t follow a specific process with short stories, however, even though I’ve written a lot of them. And now that I’m literally in the middle of a novel, I have some ideas about how the process has worked, but it’s my first, so I can’t say that I have a process yet. The one thing that is consistent across the board when I’m writing a creative project or an article or whatever, though, is this: when I have a rough draft and its been edited somewhat, I shelve it for a few days or even a couple of weeks, so I can return to it with fresh eyes.

I learned a hard lesson in the last few weeks, a lesson that tells me that I need to adhere to what little consistent process I have in writing. I had a great new idea for a short story spark in my head right after the birth of our daughter…one of those times when you wake up after a bizarre dream and realize that the dream would be really cool on the printed page. It took off from there, and I had a rough draft in three days. Then I edited, but I felt a time crunch for some reason…I’m not sure why, it’s not like I was on any sort of deadline other than what I had imposed on myself. In any case, I didn’t shelve it. I edited, rushed it by a couple of beta-readers, gave it a few final passes even though I couldn’t focus on it any more and registered it for copyright in record time. I think its because I had already researched and found a science-fiction journal that I was convinced was a great fit for this story. It’s exactly the kind of piece, I thought, that they print. This was going to be an instant success, I knew. I just knew. So, I hurried through the editing, and submitted, instead of following the process.

Then I sat back and waiting for the good news.

And, three weeks later, the rejection slip arrived in my inbox.

Now, they were kind and offered strong editorial feedback on the piece, which is exactly what a writer wants when their work is rejected. Part of the feedback was that the language was “clunky” is places. Like any writer, I’ve received more rejection notices than I have acceptance notices. Writing is, by nature, the definition of insanity. This one stung, though. It took me a few hours to shake this one. Then, at least, I made a smart decision. I didn’t touch the piece for a week and a half.

Then, the words “clunky language” resonating in my head, I delved into it again with fresh eyes for a new round of edits. I found clunky language. I found obvious grammatical errors, an unforgivable oversight when submitting for publication. I actually found inconsistencies in the facts of the story! In short, this is a manuscript that I had proudly submitted, convinced of its pending success, that screamed amateur!!!

The worst of it is that all of these errors and problems are things that I quickly discovered after shelving the manuscript for a couple of weeks, looking at it afresh, and doing a systematic edit. In other words, had I followed my process, the manuscript would have stood a much better chance at publication.

I think the lesson I’ve learned here is about patience. I need to acquire some. Being creative takes time if the project is going to be done correctly.

Writing is the definition of insanity. You work hard at something, submit it, receive a rejection, and then submit it again somewhere else, expecting a different result.

Batman: Noel by Lee Bermejo
My rating: 5 of 5 stars

Batman:Noel is a one-shot graphic novel making its debut for this Holiday season. Essentially, the novel is a re-imagining of Dicken’s A Christmas Carol, casting Batman/Bruce Wayne as Scrooge, justifying his willingness to use a man named Bob, a man who is stuck in a dead-end job and chooses to carry packages for the Joker in order to handle the expenses of the medical bills for his son, Tim (see the parallels?). Batman weaves a plan to exploit Bob and use him as bait to bring the Joker out of hiding, despite the fact that this will endanger Tim, as well as Bob. Batman sees this as a valid tactic, because the goal of taking villainy off the streets of his city justifies any method, including risking those he sees as guilty, and their families.

And thus, from the beginning, Bermejo presents the reader with a bitter Batman, a hero lost and consumed in his passion to defeat evil at any cost, including potential harm to innocents. We see a Batman who has permitted his own tragic history to place his soul at risk. We see Scrooge in the Dark Knight, placing his plan in motion on Christmas Eve, because its just another day, a day like any other.

Of course, staying true to the classic story line, Batman is thus visited by three people who attempt to show him where he has gone off track, and who attempt to win him back over to being the hero he once was at this most sacred time of year, the Christmas Holiday. Catwoman appears as the Ghost of Christmas Past, leading Batman to re-live the passion, optimism, and principles that he once held. Superman appears as the Ghost of Christmas Present, gently breaking the Batman’s self-perception of being the respected bringer of justice who is beyond question by permitting him to overhear the true concerns about how he is about to go over the edge that are voiced by Commissioner Gordon and members of his police force. Lastly, the Joker finally appears, drawn in beautifully terrifying and hideous form, as the Ghost of Christmas Future, attacking Batman and leading him to imagine, in an unconscious state, the future as it might play out should he continue down the path that he is traveling. This sequence takes place in a hellish dream state that is in marked contrast to the cool, dark, and foreboding art that makes up the rest of the novel.

Bermejo hints at a love for Dicken’s work in his dedications, and this feels like a expertly-crafted homage to the author he seems to identify as such a huge influence on him. He captures the essence of Dicken’s story here, making it all the more poignant by presenting Scrooge’s tragically flawed nature in one we have come to know as a hero. He encapsulates his story of redemption in a statement from the narrator in the beginning of the novel, a statement that is the thesis of Bermejo’s work here:

This is particularly fascinating as we see Batman drifting in danger of becoming an anti-hero. Bermejo is presenting us with the hero who has always seen every human being, even the worst of villains, as being candidates for redemption , now desperately needing that redemption himself. Watching the Dark Night Detective move through the journey to that redemption is powerful, and complete with a theological statement of re-birth in a striking half-page panel as  Batman rises from the grave in which the Joker has left him, returning to a new life and purpose from the death that his bitterness has brought about, resurrected, as it were, to a clearer…and more heroic…purpose.

The art throughout the novel is pristine and brilliant, with floating fonts superimposed over the panels as the unseen narrator moves us through the story. Bermejo’s dialogue shines as much as his overall storyline, making a graphic novel that is difficult to put down.

For any superhero fan, and certainly for any Batman fan, Batman:Noel is an exploration of redemption in the truest Christmas fashion. In fact, if you’re new to graphic novels altogether, this would be a great place to start.

View all my reviews

This is a beautiful, ornately decorated and lit basket that I purchased from a colleague several years ago. I bought it as a gift to my parents for Christmas. And, in my most humble opinion, it is one of the coolest Christmas gifts I’ve ever purchased!

Karen and I are spending this Christmas with my end of the family, based not quite as far North as Karen’s side, but still far enough to be substantially colder. My parents are notorious for being a bit elaborate with the Christmas light show, but they manage to avoid being gaudy or tacky. Christmas decorations are a curious thing. Its no surprise, I don’t think, that we illuminate our nights with festive lighting at the time of year when daylight is shortest, and days of dreary weather can depress the most optimistic among us. For those of us who celebrate Christmas, this is a most celebratory of occasions, marking the moment when history altered forever, both in the realms of the finite and the Infinite. We celebrate, in part, by shining lights into the darkness, a literal symbol of the most poetic description of He whose birth we observe. Even the most environmentally conscious among us become quickly tolerant of electric candles in our windows and Christmas trees lit from dusk to bedtime.

I love our Christmas tree, what Karen refers to as a “memory tree.” Our ornaments are a collection from our past, both our lives before we met and our subsequent adventures together. I have a Santa from my freshman year in college, and a paper gingerbread man from my first real job after college. We have an ornament from the beach where we spent our honeymoon, and an ornament from our trip to the International Spy Museum.

The reason I love this theme of decoration for our Christmas tree is because it allows me to end our year by re-visiting some of the best moments of our lives, talk about the moments that happened before we met, be thankful for the adventures that we’ve had, and anticipate the adventures that are yet to come.

How do you decorate your tree? Why?

I wish you all a most blessed and peaceful of Holidays.